Its forty degrees outside. You have turned up the furnace and you are still chilled. As you go to the kitchen to get some hot tea, you notice that there is something moving in the cat’s food dish. Yup, those are ants. You thought that you had gotten rid of them in the late summer but here they are again, in February. This is a familiar situation for us.

We are ant exterminators in Portland for over 27 years and we have learned a lot about our winter ants.

Are those cold weather visitors carpenter ants? The short answer is no. There are four species of carpenter ant that are common in the Portland area and they usually are not seen inside homes from July through March. The same is true for most of the other ant species here.

These ants can be very hard to exterminate, particularly in the winter. A little review of ant biology will help explain the difficulty in getting rid of them. Ants and all other insects are cold blooded. This means that the speed of their metabolism, and the effectiveness of any control agent, is directly tied to the temperature of their immediate environment. Nature First has observed that ants start to explore and forage when the temperature in their immediate environment is over about fifty degrees. The higher the local temperature, the more activity will be seen.

By their immediate environment, I mean a wall void, your kitchen ceiling dry wall, the space behind your refrigerator, furnace or water heater. If you think about how heat rises and radiates, you will begin to see a pattern for ant activity in certain areas of your home. Because of the sun, the south and west facing walls of your house will warm up sooner in the spring and cool down later in the fall. This longer lasting warm season encourages ants to colonize these parts of the house. Brick or stone walls and planter boxes act as heat reservoirs and can greatly extend the active season of an ant colony in Portland.

The south and west walls also get hammered by the rain and sun to the point that driven rain gets into cracks opened up by this intense weathering. Any moisture getting into a wall will attract ants and cause a colony to nest there. Odorous House ants as well as carpenter ants will chew open these cracks to allow more rain to get into the wall or roof. Soon wood rot sets in and the ants encourage it to make their tunneling easier and to moisturize their egg and larval storage areas.

Odorous House Ant colonies can range in size from an entire colony in an acorn, to a multi-million ant mega colony that can inhabit and dominate the insect eco system of entire city blocks. These large colonies are almost impossible to exterminate, all you can do is try to control where they travel.

Trees are a natural grocery store for an ant colony. We look at the types and location of trees on your property as part of the solution in exterminating resident ant colonies in your home. Trees provide pollen, fruit, nectar, and several insect species that the ants harvest for food. If a tree touches a house, directly or indirectly, ants will go from the house to the touching branches without ever touching the ground. A pesticide spray around the foundation of your home will not control the ants in this situation. Trees that touch a house near or on a roof will encourage ants to colonize the roof and attic. Remember that a house provides what the ants consider to be a superior shelter with climate control and moisture sources. Gutters are sources of ant food and water. Nature First insists on trimming back trees and large shrubs as part of our ant treatment program.

Winter ant colonies are usually found near a source of moisture. Roof leaks, sky light condensation, window trim, and bathrooms are common sources of moisture in a home. Bathroom fans are often vented improperly and cause insect and mold problems in attic areas. We pay special attention to inspecting tubs and shower floors where the tile grout is cracked. Ants with a continuing source of moisture are very difficult to control. These ants are attracted to the constant moisture source under the shower pan. They come out of hiding to feed on soaps, toothpaste and oils that are used in the bathrooms. The more organic and natural the product, the more the ants like it.

Exterior sprays are of limited value in the coldest months when you are dealing with a colony that has taken up residence in your walls or attic. We use non repellent products around the outside of your house for most of the year. But, when ants are not foraging outside they are not walking through our treated areas.

Even the bait products we use have a limited effect in the winter. In the summer this combination of baits and low volume, least toxic, exterior sprays will kill ant colonies in a matter of days. The exterior temperature is the limiting factor. In the winter, Nature First has used very low toxicity sprays in very limited areas indoors to give the homeowner relief from the invasion. We know we are not going to get a total colony kill until the weather warms up. But, unlike other companies that want the problem to continue, we really do expect to kill the colony that is living in your house. So, yes, we can give you some immediate and safe help with invading ants in the winter, and all year long. 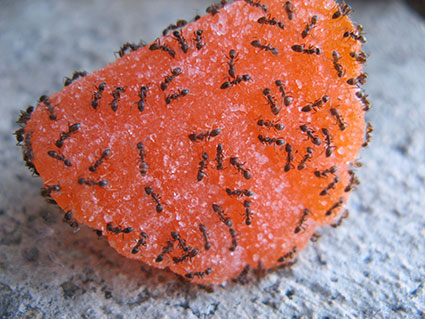